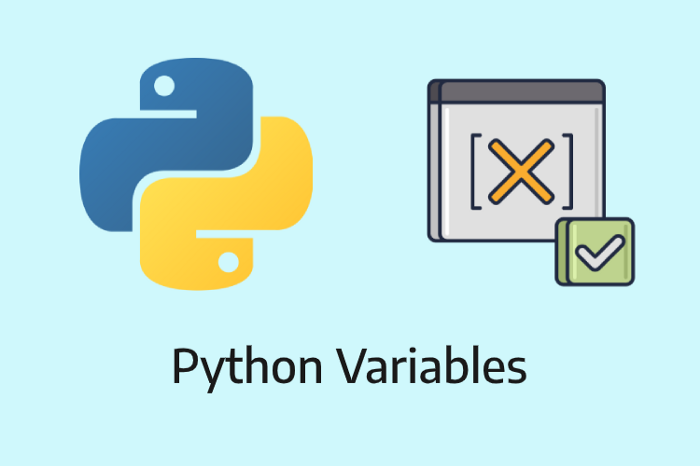 Variable is a name that is used to refer to memory location. Python variable is also known as an identifier and used to hold value.

In Python, we don’t need to specify the type of variable because Python is a infer language and smart enough to get variable type.

Variable names can be a group of both the letters and digits, but they have to begin with a letter or an underscore.

It is recommended to use lowercase letters for the variable name. Rahul and rahul both are two different variables.

Variables are the example of identifiers. An Identifier is used to identify the literals used in the program. The rules to name an identifier are given below.

Python does not bind us to declare a variable before using it in the application. It allows us to create a variable at the required time.

We don’t need to declare explicitly variable in Python. When we assign any value to the variable, that variable is declared automatically.

The equal (=) operator is used to assign value to a variable.

It is necessary to understand how the Python interpreter works when we declare a variable. The process of treating variables is somewhat different from many other programming languages.

Python is the highly object-oriented programming language; that’s why every data item belongs to a specific type of class. Consider the following example.

The Python object creates an integer object and displays it to the console. In the above print statement, we have created a string object. Let’s check the type of it using the Python built-in type() function.

In Python, variables are a symbolic name that is a reference or pointer to an object. The variables are used to denote objects by that name.

Suppose we assign the integer value 50 to a new variable b.

The variable b refers to the same object that a points to because Python does not create another object.

Let’s assign the new value to b. Now both variables will refer to the different objects.

In Python, every created object identifies uniquely in Python. Python provides the guaranteed that no two objects will have the same identifier. The built-in id() function, is used to identify the object identifier. Consider the following example.

We assigned the b = a, a and b both point to the same object. When we checked by the id() function it returned the same number. We reassign a to 500; then it referred to the new object identifier.

We have already discussed how to declare the valid variable. Variable names can be any length can have uppercase, lowercase (A to Z, a to z), the digit (0-9), and underscore character(_). Consider the following example of valid variables names.

In the above example, we have declared a few valid variable names such as name, _name_ , etc. But it is not recommended because when we try to read code, it may create confusion. The variable name should be descriptive to make code more readable.

The multi-word keywords can be created by the following method.

Python allows us to assign a value to multiple variables in a single statement, which is also known as multiple assignments.

The values will be assigned in the order in which variables appear.

There are two types of variables in Python – Local variable and Global variable. Let’s understand the following variables.

Local variables are the variables that declared inside the function and have scope within the function. Let’s understand the following example.

We tried to use local variables outside their scope; it threw the NameError.

Global variables can be used throughout the program, and its scope is in the entire program. We can use global variables inside or outside the function.

In the above code, we declare a global variable x and assign a value to it. Next, we defined a function and accessed the declared variable using the global keyword inside the function. Now we can modify its value. Then, we assigned a new string value to the variable x.

Now, we called the function and proceeded to print x. It printed the as newly assigned value of x.

We can delete the variables using the del keyword. The syntax is given below.

In the following example, we create a variable x and assign value to it. We deleted variable x, and print it, we get the error “variable x is not defined”. The variable x will no longer use in future.

Maximum Possible Value of an Integer in Python

Unlike the other programming languages, Python doesn’t have long int or float data types. It treats all integer values as an int data type. Here, the question arises. What is the maximum possible value can hold by the variables in Python? Consider the following example.

As we can see in the above example, we assigned a large integer value to variable x and checked its type. It printed class <int> not long int. Hence, there is no limitation number by bits and we can expand to the limit of our memory.

We can print multiple variables within the single print statement. Below are the example of single and multiple printing values.

This section contains the fundamentals of Python, such as:

There are following tokens in Python: