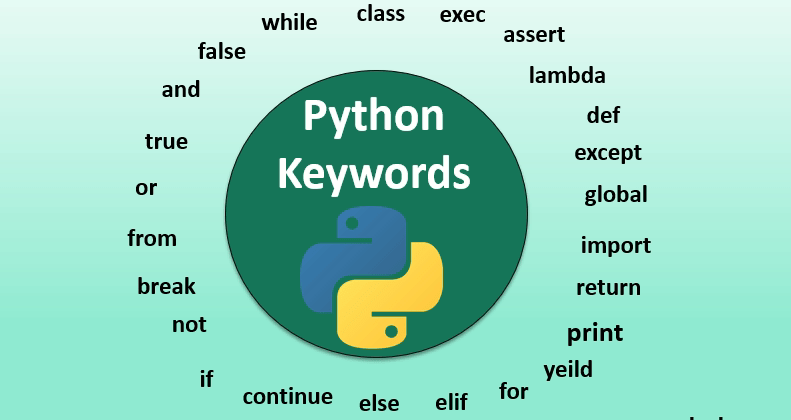 In this tutorial we will be learning about keywords in python. Keywords are the reserved words in Python. We cannot use a keyword as a variable name, function name or any other identifier.

Here’s a list of all keywords in Python Programming

1. True : This keyword is used to represent a boolean true. If a statement is true, “True” is printed.

2. False : This keyword is used to represent a boolean false. If a statement is false, “False” is printed.
True and False in python are same as 1 and 0. Example:

None is a special Keyword constant in Python that represents the absence of a value or a null value.

It is an object of its own datatype, the NoneType. We cannot create multiple None objects but can assign it to variables. These variables will be equal to one another.

We must take special care that None does not imply False, 0 or any empty list, dictionary, string etc. For example:

Void functions that do not return anything will return a None object automatically. None is also returned by functions in which the program flow does not encounter a return statement. For example:

This program has a function that does not return a value, although it does some operations inside. So when we print x, we get None which is returned automatically (implicitly). Similarly, here is another example:

Although this function has a return statement, it is not reached in every case. The function will return True only when the input is even.

and, or , not Keyword

and, or, not are the logical operators in Python. and will result into True only if both the operands are True. The truth table for and is given below:

or will result into True if any of the operands is True. The truth table for or is given below:

not operator is used to invert the truth value. The truth table for not is given below:

some example of their usage are given below

As for example, Python has a standard module called math. Suppose we want to calculate what cosine pi is using an alias. We can do it as follows using as:

assert is used for debugging purposes.

While programming, sometimes we wish to know the internal state or check if our assumptions are true. assert helps us do this and find bugs more conveniently. assert is followed by a condition.

For our better understanding, we can also provide a message to be printed with the AssertionError.

At this point we can note that,

The async and await keywords are provided by the asyncio library in Python. They are used to write concurrent code in Python. For example,

To run the program, we use

In the above program, the async keyword specifies that the function will be executed asynchronously.

Here, first Hello is printed. The await keyword makes the program wait for 1 second. And then the world is printed.

break and continue are used inside for and while loops to alter their normal behavior.

break will end the smallest loop it is in and control flows to the statement immediately below the loop. continue causes to end the current iteration of the loop, but not the whole loop.

This can be illustrated with the following two examples:

Here, the for loop intends to print numbers from 1 to 10. But the if condition is met when i is equal to 5 and we break from the loop. Thus, only the range 1 to 4 is printed.

Here we use continue for the same program. So, when the condition is met, that iteration is skipped. But we do not exit the loop. Hence, all the values except 5 are printed out.

class is used to define a new user-defined class in Python.

Class is a collection of related attributes and methods that try to represent a real-world situation. This idea of putting data and functions together in a class is central to the concept of object-oriented programming (OOP).

Classes can be defined anywhere in a program. But it is a good practice to define a single class in a module. Following is a sample usage:

def is used to define a user-defined function.

Function is a block of related statements, which together does some specific task. It helps us organize code into manageable chunks and also to do some repetitive task.

The usage of def is shown below:

del is used to delete the reference to an object. Everything is object in Python. We can delete a variable reference using del

Here we can see that the reference of the variable a was deleted. So, it is no longer defined. But b still exists.

del is also used to delete items from a list or a dictionary:

if, else, elif are used for conditional branching or decision making.

Here, the function checks the input number and prints the result if it is 1 or 2. Any input other than this will cause the else part of the code to execute.

Learn more about Python if and if…else Statement.

except, raise, try are used with exceptions in Python.

Exceptions are basically errors that suggests something went wrong while executing our program. IOError, ValueError, ZeroDivisionError, ImportError, NameError, TypeError etc. are few examples of exception in Python. try...except blocks are used to catch exceptions in Python.

We can raise an exception explicitly with the raise keyword. Following is an example:

Here, the function reciprocal() returns the reciprocal of the input number.

When we enter 10, we get the normal output of 0.1. But when we input 0, a ZeroDivisionError is raised automatically.

This is caught by our try…except block and we return None. We could have also raised the ZeroDivisionError explicitly by checking the input and handled it elsewhere as follows:

finally is used with try…except block to close up resources or file streams.

Using finally ensures that the block of code inside it gets executed even if there is an unhandled exception. For example:

Here if there is an exception in the Try-block, it is handled in the except or else block. But no matter in what order the execution flows, we can rest assured that the Finally-block is executed even if there is an error. This is useful in cleaning up the resources.

for is used for looping. Generally we use for when we know the number of times we want to loop.

In Python we can use it with any type of sequences like a list or a string. Here is an example in which for is used to traverse through a list of names:

Learn more about Python for loop.

now we can use the function simply as cos(), no need to write math.cos().

If we need to read the value of a global variable, it is not necessary to define it as global. This is understood.

If we need to modify the value of a global variable inside a function, then we must declare it with global. Otherwise, a local variable with that name is created.

Following example will help us clarify this.

We can see in our output that the modification did take place (10 is changed to 5). The write2() also tries to modify this value. But we have not declared it as global.

Hence, a new local variable globvar is created which is not visible outside this function. Although we modify this local variable to 15, the global variable remains unchanged. This is clearly visible in our output.

in is used to test if a sequence (list, tuple, string etc.) contains a value. It returns True if the value is present, else it returns False. For example:

The secondary use of in is to traverse through a sequence in a for loop.

It returns True if the objects are identical and False if not.

We know that there is only one instance of True, False and None in Python, so they are identical.

An empty list or dictionary is equal to another empty one. But they are not identical objects as they are located separately in memory. This is because list and dictionary are mutable (value can be changed).

Unlike list and dictionary, string and tuple are immutable (value cannot be altered once defined). Hence, two equal string or tuple are identical as well. They refer to the same memory location.

lambda is used to create an anonymous function (function with no name). It is an inline function that does not contain a return statement. It consists of an expression that is evaluated and returned. For example:

Here, we have created an inline function that doubles the value, using the lambda statement. We used this to double the values in a list containing 1 to 5.

The variable a is in the outer_function(). So, if we want to modify it in the inner_function(), we must declare it as nonlocal. Notice that a is not a global variable.

Hence, we see from the output that the variable was successfully modified inside the nested inner_function(). The result of not using the nonlocal keyword is as follows:

Here, we do not declare that the variable a inside the nested function is nonlocal. Hence, a new local variable with the same name is created, but the non-local a is not modified as seen in our output.

pass is a null statement in Python. Nothing happens when it is executed. It is used as a placeholder.

Suppose we have a function that is not implemented yet, but we want to implement it in the future. Simply writing,

in the middle of a program will give us IndentationError. Instead of this, we construct a blank body with the pass statement.

We can do the same thing in an empty class as well.

return statement is used inside a function to exit it and return a value.

If we do not return a value explicitly, None is returned automatically. This is verified with the following example.

while is used for looping in Python.

The statements inside a while loop continue to execute until the condition for the while loop evaluates to False or a break statement is encountered. Following program illustrates this.

Note that 0 is equal to False.

Learn more about Python while loop.

with statement is used to wrap the execution of a block of code within methods defined by the context manager.

Context manager is a class that implements __enter__ and __exit__ methods. Use of with statement ensures that the __exit__ method is called at the end of the nested block. This concept is similar to the use of try…finally block. Here, is an example.

This example writes the text Hello world! to the file example.txt. File objects have __enter__ and __exit__ method defined within them, so they act as their own context manager.

yield is used inside a function like a return statement. But yield returns a generator.

Generator is an iterator that generates one item at a time. A large list of values will take up a lot of memory. Generators are useful in this situation as it generates only one value at a time instead of storing all the values in memory. For example,

will create a generator g which generates powers of 2 up to the number two raised to the power 99. We can generate the numbers using the next() function as shown below.

And so on… This type of generator is returned by the yield statement from a function. Here is an example.

Here, the function generator() returns a generator that generates square of numbers from 0 to 5. This is printed in the for loop.

Program to find Roots of a Quadratic Equation

Program to find Roots of a Quadratic Equation